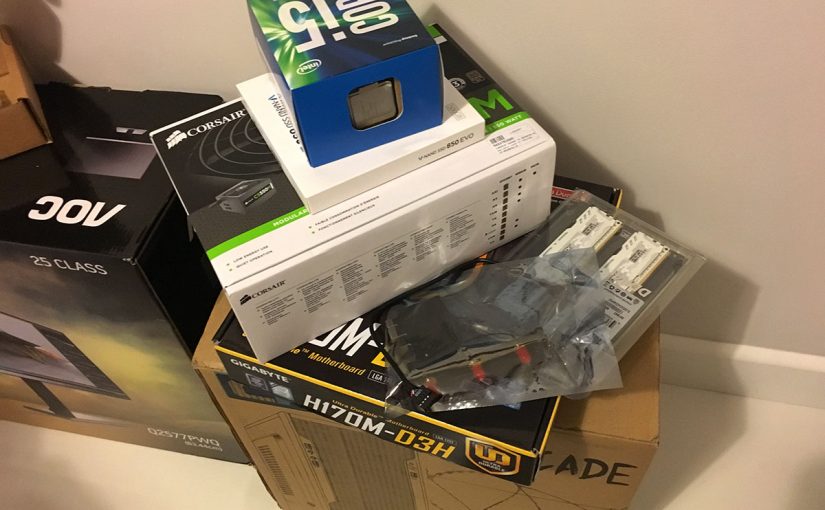 I’ve been waiting what feels like forever for Skylake systems to make the tonymac buyers guide. They finally seemed pretty stable, especially as more genuine Macs made the update to Skylake. I wanted a kind of middle-of-the-road setup to replace a 2006 white iMac I’ve been using from new. Being stuck on 10.7 was starting to cause me trouble, and the 3GB maximum RAM was a nightmare!

I bought most of the parts from the buyer’s guide links. The case I liked was temporarily out of stock here in the UK, so I tried the CIT Barricade instead. It’s a decent small tower, maybe even smaller than it looks online.

I’m happy to report that the system is now updated to macOS Sierra 10.12.2 & running well with sleep, audio, Wifi & ethernet all working. I’ve noticed a minor hassle that headphone sensing won’t work after a reboot,  but it looks like CodecCommander should sort that out. There were a few snags along the way, which were unexpected after my last successful build. My previous hackintosh was a GA-Z77N-WIFI based system running Mavericks and needed very little modification to reach 100% functionality.

Sleep / wake is still causing problems when using the integrated Intel HD530 GPU, so I bought the cheapest NVIDIA GPU on the list. I’m usually happy enough with the built-in GPU, so don’t need anything fancy. Sleep / wake is much more important as this is a home system that won’t just be used by me. This was the first cause of trouble for me. After changing the system definition from default iMac14,2 to iMac17,1 for native Skylake power management & chipset support, I lost output to my screen. I used the USB installer to reboot and change the system definition back while I searched for a solution. The root cause seems to be something to do with the hacky way Apple runs Retina iMacs that disables output from the second GPU if two are installed. Fortunately there is a patch that prevents this behaviour, however-patching is needed after software updates. I’ve yet to try an alternative patch that looks like it may install into the Clover config and therefore survive updates.

With the GPU problem solved I was able to switch to iMac 17,1 and get native Skylake CPU power management etc. This sorted sleep / wake, and also got the CPU power management running correctly, as noted by the fan getting loads quieter. A quick note about the cooler (fan) options for these new CPUs. They are pretty limited at the moment, especially in my space-limited case. Despite the awful reviews for noise, I decided to try the stock cooler that came with the CPU. It is every bit as bad as everyone says it is. I’ve not even checked the temperatures as the noise from it is already unbearable. I’m just about to replace it with a Gelid Siberian cooler instead.

Gelid cooler is now installed & way quieter than the stock intel fan. It uses push-pin installation so there was no need to remove the motherboard. This improvement has now made the hackintosh quieter than the old iMac it has replaced.

Next problem was ALC892 audio. Both ALC892 & 100 series audio need to be checked in Multibeast for working audio. Not a big deal, but easy to overlook. Still yet to resolve headphone sensing after sleep, see note above.

Although my front panel USB ports worked from the start, I didn’t think to check the ones on the back. I realised the block of 4 USB 3.0 ports didn’t work. I checked “raise max port limit” and “USBInjectAll.kext” in Multibeast. This fixed the rear USB ports, but caused a new problem. A few seconds after sleeping, the machine would wake itself back up again. Also instead of shutting down, the machine would reboot. Removing the USBInjectAll.kext fixed this problem. I guess I only needed the Raise max port option.

Ethernet problems next. During the initial Multibeast setup I chose the IntelMausiEthernet 2.2.0 driver as suggested in the forum. The ethernet board showed up in system profile, but I wasn’t within range of a wired connection. When I later went to use ethernet for the first time, the port would cycle between cable unplugged and replugged. Removing 2.2.0 and replacing it with IntelMausiEthernet 2.1.0 got things working normally.

Keen for not just solid WiFi, but also Handoff, Continuity & Airdrop, I read that the best way forward is a genuine Apple Airport card +PCIe adapter. Fortunately some sellers on Amazon have combined these into a single package, complete with external antennas. This was a simple as the physical installation. The card showed up as a native Airport card without any need for configuration or anything. The Bluetooth chip needs a USB connection, and a clever cable was provided to run this from the spare front-panel USB header on the motherboard.

Had I known about all of these niggles, I would have probably still built the system anyway. I’m putting this guide out, so anyone using similar kit can jump right in, without too much head scratching.

Below are the parts I used. I’ve not linked them as I strongly suggest you instead use the tonymac buyers guide (link at the top) for current recommendations, and also to use his amazon referral links which support his site & continued work getting this stuff together.