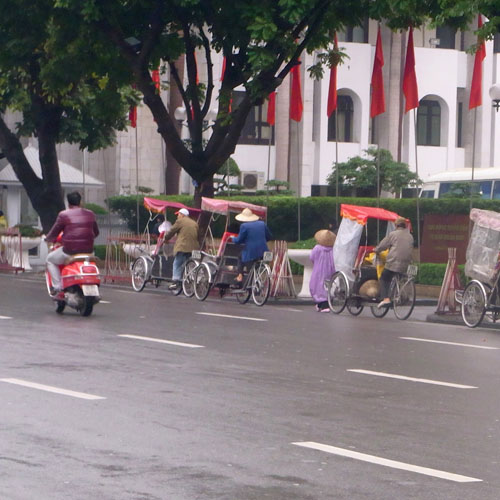 I somehow managed to sleep through most of the flight so felt pretty good when we landed in Hanoi. We asked at the information kiosk about a sleeper train to Hoi An, but they were fully booked. We had been banking on getting a train straight to Hoi An so we hadn’t really planned what to do in Hanoi. We were ushered into a taxi and driven towards the city centre.

We should have realised when the driver started playing music videos on a small screen that this wasn’t your usual government issue taxi.

He eventually pulled up in a side street, where a dodgy Hotel owner was waiting to try and sell us rooms. The taxi driver snatched 2 million Dong from Frank’s wallet and after a heated exchange we grabbed our stuff and started walking. Fast.

2 million Dong is only about £60 so we counted ourselves lucky and shared the cost between us. We later found out that it should have only been £10.

In that moment of madness we had ignored all our own advice and been taken advantage of. We all felt a bit stupid and quite vulnerable. We didn’t have a clue where we were or where we wanted to go.

Find a big landmark, head for that

We knew that Hanoi had a big lake in the middle so we tried to head for that. By some huge fluke we wandered straight by a Hosteling International Hostel. We took refuge in the lobby and were so happy when they gave us a room for the night for only £4 each.

The rain was still heavy but we decided to get out and have a walk round the old quarter. The noise of this place is like nowhere else. Cars and motorbikes use their horns at every opportunity. It isn’t very relaxing to walk around the streets, which are often 5 deep with parked mopeds. Walking along a busy road, whilst motorbikes crowd the pavement seems mad.

After our walk I was totally shell shocked so went for a lie down. Nic and Frank went to look at tours to Halong Bay. They seem quite expensive at around $30-40 USD. Vietnam uses the US Dollar almost as a second currency, the problem is that you can only get it on the black market here. We decided to use local currency instead.

Before we got here we had heard news of a British guy drowning on an overnight Halong Bay trip, so we didn’t want to spend a night on the boat. Luckily there was the alternative option to stay on an Island instead.

We had a bad start in Vietnam so I went to bed hoping to wake up in a better mood. We have been away from home for 3 weeks and have yet to see a single beach yet. The islands of Thailand are calling me.